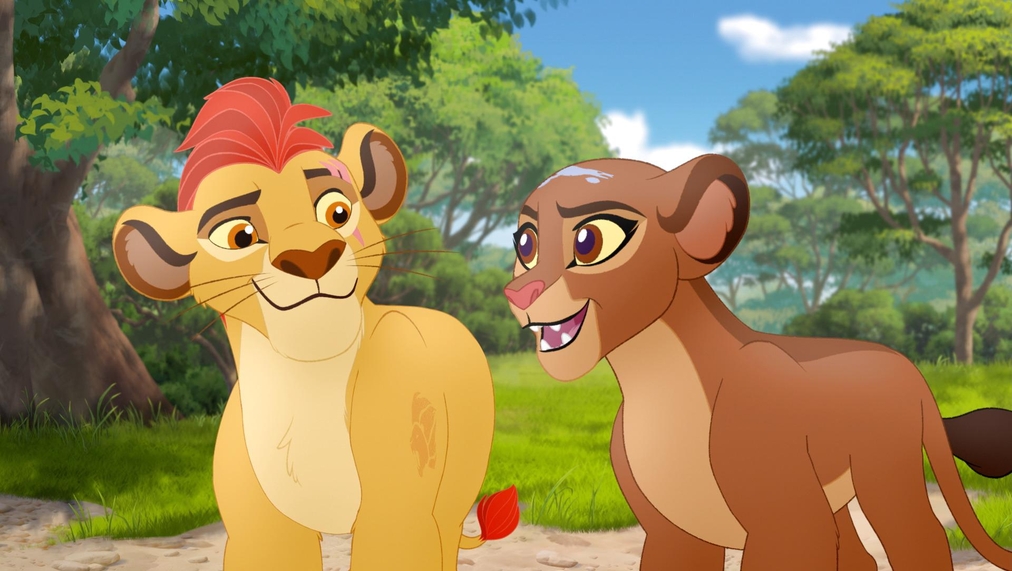 season 4 OR a new sequel show entirely extending this story

I agree we need season 4

Absolutely, the Night Pride is amazing.

I am with you buddy!

Not entirely but here's my idea: The thing is that could be making a movie. Or that they are making a more adolescent version of The Lion Guard, meant for older viewers because Kion is now married with Rani. Also the ending makes absolutely no sense AT ALL! An ending is supposed to wrap up all that has been going on. This ending doesn't feel conclusive, it feels as if something new is beginning. Like a new spin-off (as I previously mentioned). They could call it "The Night Pride" or "Adventures in The Tree of Life". Another aspect/version of this (to make it more understandable) that makes no sense is the marriage. Kion and Rani agree to rule The Tree of Life together and get married then BOOM. The entire series ends. (Me inside my brain: Excuse me, WTF!, this makes no sense!!!)

In my opinion I find my ideas the most logical with also pleasing the fans :)

I agree with you it shouldn't have ended like this

But... "The Lion Guard" was my first love! My favorite television program that I loved since SEASON 1!!! They can't change it! "The Night Pride" doesn't have the same ring to it!

(no offence) So you would want Kion to leave Rani and go back to the Pride Lands, kick Vitani out even though he gave her and her guard the mark, and get the mark back. I don't think that's how it works.
Also I don't know that they are going to name the new series. This is just a fan made guess.

I was thinking more like...
Following the mysterious assassination of Simba, the pridelands fall into anarchy and disorder, and the remnants of the old monarchy adopt a more brutal approach to foregin policy, COMMITTING GENOCIDE AGAINST THE OUTLANDERS!! And the Lion Guard are more... different now. Beshte is a party animal (Pun intended) Bunga is having an "affair" with Binga, Ono is now a logistics officer for the Night Pride, Kion is constantly sucking up to Rani and abusing the Roar to impress her, and Fuli dumps Azaad (they had a fight over having kids) and she leaves the Tree of Life to go on an adventure, because we just don't have enough of that already.

That doesn't sound like a good story at all. Disney should bring Kopa back into the story who seeks healing at the tree of like.

Your version is a bit grim

Wai wait wait how in the pridelands do you type with paws because those are some super natural talents!

Grit, pain and lots of frustration.

So you're telling me.

wow thats... interesting.
And when does Simba get assassinated and how?

As I said, mysterious circumstances. But all I will say is that it was done by an outside force, not pridelands, outlands, backlands, tree of life, or any other currently known force. Mysterious, huh?

wow yeah it is, I can't wait to read it. When will it be released?

Sometime around Christmas, hopefully. But delays may occur, and I am still waiting on several things, editing and i'm only at chapter 12 right now. So sit tight, okay? On a side note, i'd describe the series as "Narnia" crossed with "Tomb Raider." So if you're into action/adventure novels, as well as The Lion Guard, I would recommend this book series.

Can't wait!
I love your ideas!

If you're seeing a different username or profile picture now, it's because I finally figured out how to edit my Disqus profile. There we go! Look at that awesome profile picture!

Disney himself said there is a chance for a new season with fan support, not to mention anything about the new series, so they are not going to continue the relationship between Kion and Rani, and Disney's night pride has other plans for the fourth season, is not surprised because he showed us this series in which you paid too much attention to the relationship between Kion and Rani, and you didn't look at her closely before you came to the conclusion

Disney is dead soooo... And where is your proof of this?
Just asking for a friend...

In my Wattpad fanfiction trilogy, Fuli dumps Azaad and leaves the tree of life to go adventuring. Some more crazy stuff happens, but you'll have to wait until December, when the first book, The Lion Guard: Bad Blood comes out to read more.

Maybe it can't have season 4 because the show is namedThe Lion Guard And now they are in th night pride, so there's no more Lion guard and if it continues the show's name won't make sense but maybe they can do something about it

Totally agree. I want to see more of the Night Pride and more of how Kiara and Kovu take care of the Pridelands. I just hope they get bigger if that is done, at least Kiara and Kovu should be grown by now and Kion and Rani are supposed to be adolescents.

Kovu and Kiara aren't that much older than Kion and Rani.

I am But its true its the Last season

I'm you too buddy i mean Rani and the night pride was just introduced. Not mention also of Anga joining them too we need more of this

I'm with you! "The Adventures of the Tree of Life" here we come!

In my Wattpad fanfiction novel trilogy, Fuli has an evil twin sibling and Azaad dumps her. Also the former lion guard have all gone their separate ways and Fuli is the main protagonist. First book comes out in December!

Sounds good I will read it

Kions voice did a total 360 turn when he started singing

I think they had to change because Max Charles' voice was cracking too much and didn't sound or something of the like. Otherwise, I see no reason why he couldn't have sang

You're right. It's Aaron Daniel Jacob who provided the singing voice, and not Max Charles.

It really caught me off guard.

That was actually Azaad who sang that! Common knowledge, really? 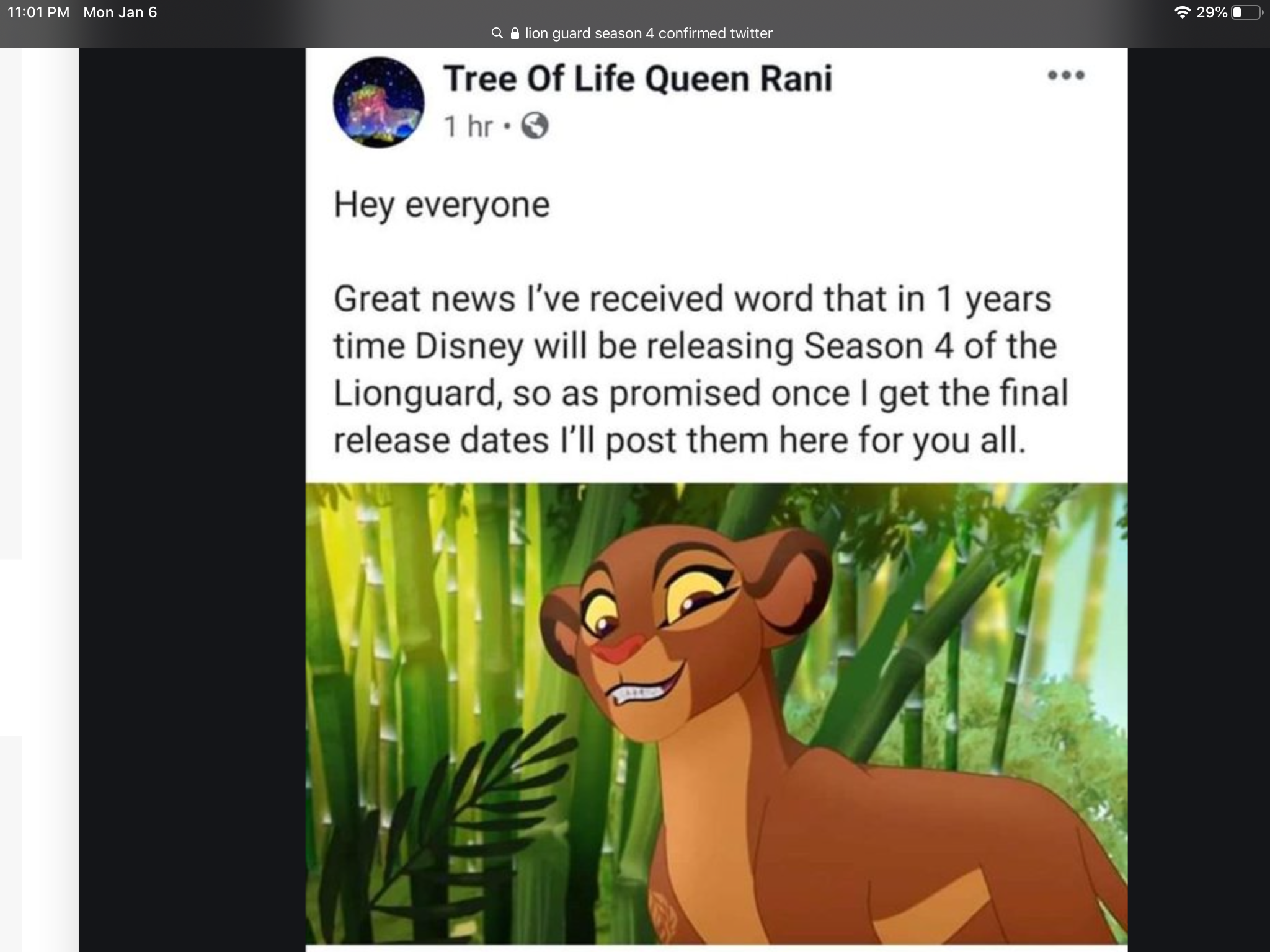 Oh I hope this isn’t a lie.

I hope he is right.

We Need a fourth season of the lion guard. So who’s with me

Kion and Rani remind me of Ahadi and Uru

17:03 janja and bunga sleep on besthes back cute!

does anyone know if there will be a season 4??

no, lion guard is cancelled

search up is the lion guard cancelled.

Actually says the answer is different per source

This information does not come from Disney, only the pages use old information from Ford Rilay

will there be a season 4 bc the producer said he wants another season and all i want is season 4 and to see kion and rani will do in the future. Like will they hav a family with cubs and will they revisit the pride lands. Also I wanna see how good kion and rani are at being king and queen.

btw i think Kion lie to his/her friends about (rani has become a good friend) but truth is that they are together... is it true? or explain to me?

These are Rani words to Kion.

Kion answers, I know the Lion Guard and the Night Pride work really well together.

Rani answers Yes, but I also mean you and me

Kion answers Yes. We Do

so is that mean also they are together like couple after that? cus after Rani was kinda sad when Kion left..

Yes, Rani was sad, I'm only interested in her word that she said to Makini at the time

well we will found it out someday.. we found the answer on it.. but yeah.. maybe Rani did mean that Kion should stay with her in tree of life and not going back to pridelands...or maybe she was rlly sad when he left with roar.. hmm?

there is must something hiding those things or words what we dont know!

Why did Kion not tell Kiara that Rani confessed his feelings and wanted him to become king. Kiara should ask Kion if he feels the same thing to Rani. Kion should say yes

You know, but I'm surprised why, for example, Rani didn't say that maybe Kion would come back to me and with him the roar would return to the tree of life

Is using both words so difficult.

See, for example, Kion knows that Fuli is always on his side, so why wouldn't he tell his best friend, for example

but does that mean also that Kion and Rani is together also when kion said that to them?

Then Kion confirms it good friends

I think she did and didn’t listen 😂

I didn't think she did

I mean I agree, Rani only ask for Kion might

After the song Kion and Rani, Kion says friends that night pride could have used Rani help, she could have been a good friend

After the song Kion and Rani, Kion says with his friends that night pride could have used Rani help, she could have been a good friend

but also love is coming between them,right?

And it was a love song

I mean they nuzzled so I would assume so

You see, there is a logical explanation for all this, because Kion and Fuli relationships were developed for the 2nd and 3rd season, and then Kion and Rani were developed for the rest of the season. I think there are two perspectives, either Kion will stay with Rani and a new series will appear, or Kion will come back from Fula with his friends to Pridelands and it will be season 4

Because there are such options or there will be a new series that will focus on the Night Duma tree and Kion and Rani as king and queen to make the new series look like.

2 option is that it will be season 4 and will focus on Kion and his friends as the lion guard Kion will transmit the power of roar, Rani Kion and the rest will return to Pridelands, and also season 4 will focus on Kiara and Kovu
the last thing will be Kion and Fuli as a couple

It is not known what will happen if season 4 or a new series, so season 3 is considered last until the decision is made

The thing is, is there going to be a s4?

Not yet Disney still not confirmed

i only hope that season 4 brings Kion's family and Kion's friends and rani with kion in tree of life. But only hopin show us them Kion family and his friends and Kion queen rani or even they going pridelands visiting some episodes of season 4 all we can hope season 4 coming out and wait what will happen!!

yeah also i mean they hug each other,right? btw do you know where you can write for disney about your ideas at lion guard and i mean websites?

2: Where do they hug. Are you assuming that because they're married?

well they are kinda of married, and yes i mean

Call this person and ask if yo