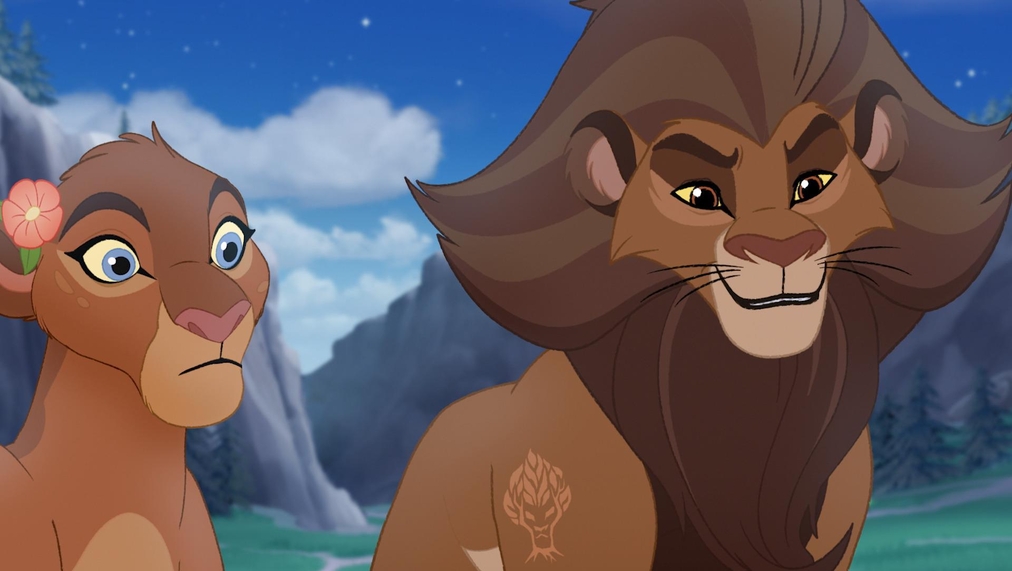 Season 3 Episode 11
The Tree of Life

The Guard is attacked by the Tree of Life protectors.

No it wasn't she was her grandmother

Everyone there is a petition up to save the lion guard and have it return for a fourth season help Ford Riley make a fourth season if you will help out like and comment saying you signed the petition #TLGSeason4.

I think Season 4 is great idea! We NEED to know about Kion and Rani's life together. I think "The Kingdom of Kion" or "Adventures at the Tree of Life" sound awesome! It would be way cooler if we got a look at Kion and Rani's heir and their other cubs. And every now and then, take a look at Vitani's Lion Guard as well. I wanna see all the new adventures in The Lion Guard.

So, I'm sort of on that. Im going to mail Disney a Kickstarter fanmade script to see if they will actually have the guts to do this.

Once you've finished it you should share a link to it. I'm interrested

I signed up for it this needs to come back

Yes, Disney has a way of making two halves to one whole. Similar events at the beginning and end of a movie or series. They did something like this in Tron Legacy too.

Wonder what happened to Rani's parents

I'm new to the story, but from what I read, they can be seen in ghost form in the clouds, saying they have long since died.

Same, I've learnt hindi as one of my languages and they pronounced it Ra-Ne, not Rah-nee or Raa-nee. Americans...

Okay, they brought in a new singing voice for Kion.

It's the same actor. Except that Max Charles is sixteen when the last season came live. He will be seventeen next year.

you must be kidding, that's totally two different kinds voices, definitely not from same person

The Lion Guard Series did start in 2015. Maybe the voice actor hit puberty?

Anyone got it is time vibes from when Kion sung

Wow They made it to the tree of life season 3 of The Lion Guard is still very awesome!!!!!!! time for next episode for me.

According to an interview with a voice actor, im pretty sure that most VAs don't sing, instead they got a different person that atleast have a similar voice to the character to sing. Why? Idk i was just at a con and someone asked if the VA can sing a certain song from the show then they said along the lines of "I don't sing the songs" or smthn idk

That's what I thought. What happened there? Was Max Charles not available or something? I'm so confused...

I think it's beau blue or whatever his name is. He sang the theme song for the show and the opening song for the premier that played at the start when Kion and Bunga are playing with that fruit before Bunga fell into the outlands and got attacked by Janja and his gangc called "It's A Good Day" or something... He is also the main songwriter for the show, so it would make sense that he could voice a grown up Kion if they decided to show a time skip at the end of the show... but him singing here is kinda weird unless he starts singing for Kion now until the end of the show? Maybe they wanted to show that Kion has aged or something? It makes no sense with Kion's speaking voice and singing up till this point being done by Max Charles.

It actually Aaron Daniel Jacob that is singing as kion

I can’t wait to see more of these guys in a new series. It’s so cute to see the progression of there relationship

They completed their journey in the Circle of Life,

did they got killed by the hunters or something?

No, if humans were to set foot on the Tree of Life they would have taken over it and they would most probably have killed every animal there. And what do you mean by 'those'?

oh i mean the humans, and oh ok and something like they got sick or they had an accident or being burned alive by the fire.

Yeah but all the animals would still be gone even if the humans died. And is your profile pic Kiara from TLG2?

ooooh, and yes that's my profile pic Kiara from TLG2.

This is so fucking good

Are these Asiatic lions? :o